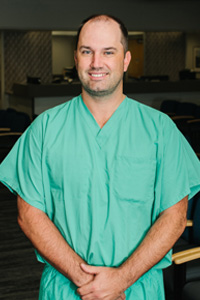 Following medical school, Dr. Baucom moved his family to Seattle, Washington for his Orthopedic Surgery Residency. He trained at the University of Washington and Harborview Medical Center which is widely regarded as one of the nation’s elite and highest-ranking orthopedic surgery programs. While in Seattle, Dr. Baucom worked alongside and was mentored by world-renowned experts in orthopedic surgery. He graduated residency as his class’ Golden Nail Recipient, an award given annually to the resident most committed to mentoring fellow residents.

After graduating residency training in 2014, Dr. Baucom moved to Nashville, Tennessee for subspecialty fellowship training in hand and upper extremity surgery at Vanderbilt University. While there, he learned cutting-edge microvascular and reconstructive techniques for hand, wrist, and elbow injuries. While in training, Dr. Baucom presented research at national meetings and contributed to journal articles and book chapters.

Upon completion of his training in 2015, Dr. Baucom and his family returned home to Utah and joined The Orthopedic Specialty Clinic. He and his wife Liz enjoy raising their kids around extended family among Utah’s beautiful mountains. He is kept busy with his kids’ sports, mountain biking and hiking, and the occasional round of golf.